Today, the Alaska State Quarter Coin remembers the day 57 years ago when President Eisenhower signed the bill agreeing to allow Alaska to become a state provided its citizens wanted to join the Union.

It took almost another six months before Alaska officially became a state on January 3, 1959.

However, in 1958, the Spokane Daily Chronicle printed the following short article announcing the president’s approval of the bill:

July 7. President Eisenhower today signed the Alaska statehood bill, paving the way for the territory’s admission into the Union later this year.

Eisenhower penned his signature to the historic legislation approved by Congress a week ago, handed it to a White House aide and said:

Then he grinned and amended the remark: “No, maybe we don’t do that until the plebiscite.”

The aide, special White House Counsel Gerald D. Morgan, smilingly agreed that Alaska territory would not become a state until a vote of its citizens.

But Eisenhower’s action set in motion the machinery which is expected to bring Alaska into the Union as the 49th state by next Christmas. It will add a new star to the flag on the next date for adoption of a new flag, July 4, 1959.

Although there is some opposition within the territory, leading Republicans and Democrats have predicted Alaskans will accept congress’ terms overwhelmingly in elections this fall.

Earlier, just after Congress voted approval, another newspaper, the Free-Lance Star out of Fredericksburg, Virginia printed details about the celebrations in the Alaskan territory:

Alaskans caught their breath today after tossing the wildest celebration since gold rush days, and looked ahead to a problem packed future as the nation’s biggest state.

They poured it on last night, with whistles, sirens, horns, bells and fireworks as they cheered news of the Senate’s passage of the statehood bill. Street dances followed parades. In Sitka, one time capital of Russian Alaska, drinks were on the house.

There seemed to be no possibility that either President Eisenhower or Alaskans would reject statehood now that Congress has approved it. But before Alaska’s star is added to the flag, a monumental task faces the territory in preparing for actual admission to the Union.

Celebrants who have fought and dreamed of statehood for the vast territory set aside thoughts of the difficult period ahead and toasted victory.

At Fairbanks, the Chena River turned gold. Wildly happy residents poured dye into the stream near where one of Alaska’s big gold strikes lured pioneers and sourdoughs at the turn of the century.

At Skagway, the gateway to the big Klondike gold strike of 1898, housewives paraded in the streets wearing embroidered badges that proclaimed:

At Anchorage, a huge bonfire blazed long through the overnight twilight in the Land of the Midnight Sun.

In every city of the territory, and in its scattered villages and towns, the celebration went on.

Not everywhere, however, was the merry making as loud or spontaneous as it was at Anchorage and Fairbanks, centers for years of the statehood movement.

At Juneau, the capital and seat of conservative opposition to statehood, hundreds celebrated and cheered as a replica of the Liberty Bell was struck 49 times and as scores danced in the street under bursting fireworks and aerial displays.

But a few residents grumbled and some protested that hardships and higher taxes were in store.

Even among long time opponents of statehood, however, there was a general feeling that the past should be forgotten and that Alaskans should unite in the job ahead.

The Alaska State Quarter Coin shows against a background of territory homesteaders circa 1900. 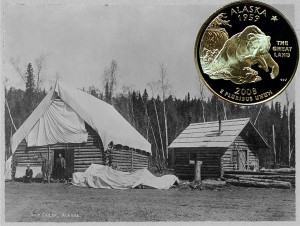