Today, the Half Cent Coin remembers the Continental Congress and their unanimous approval of the decimal money unit 230 years ago.

In the History of the Monetary Legislation and of the Currency published in 1896, Robert E. Preston and James Herron Eckels included the following from the Continental Congress:

1st. The value of Silver compared with Gold,
2d. The weight or size of the several pieces of money that are to be made,
3d. The Money Arithmetic or the mode in which it is to be counted, and
4th. The Charges of Coinage are to be considered.

1. In France 1 – grain of pure Gold is counted worth 15 grains of silver. In Spain 16 grains of silver are exchanged for 1 of Gold and in England 155th. In both of the Kingdoms last mentioned Gold is the prevailing money, because Silver is undervalued. In France Silver prevails.

Sundry advantages would arise to us from a system by which silver might become the prevailing money. This would operate as a bounty to draw it from our neighbors by whom it is not sufficiently esteemed. Silver is not exported as easily as gold and it is a more useful metal.

Certainly our Exchange should not be more than 1 5 gr. of silver for 1 of Gold. It has been alleged by the late Financier that we should not give more than 143-2- Perhaps 14% would be a better medium considering the quality of Gold that may be expected from Portugal.

2. The weight, size or value of the several pieces of money that shall be made or rather the most convenient value of the money unit is a question not easily determined considering that most of the citizens of the U. S. are accustomed to count in Pounds, Shillings and Pence and that those sums are of different values in the different states, hence they convey no distinct ideas. The money of the U. S. should be equally fitted to all. The late Financier has proposed to make gold and silver Pieces of particular weight, and there is a very simple process by which the imaginary money of the several States may be translated into such pieces or vice versa.

He proposes that the Money Unit be one-quarter of a grain of pure silver; that the smallest coin be of Copper which shall be worth five of those Units. The smallest silver coin to be worth 100 units, another to be worth 500, and another of 1000 and thus increasing decimally.

The objections to this plan are that it introduces a coin unlike in value to anything now in use; It departs from the national mode of keeping accounts, and tends to preserve inconvenient prejudices whence it must prevent national uniformity in accounts; a thing greatly to be desired.

Another plan has been offered, which proposes that the money unit be one dollar; and the smallest coin is to be of copper, of which 200 shall pass for one dollar. This plan also proposes, that the several pieces shall increase in a decimal ratio; and that all accounts be kept in decimals, which is certainly by much the most short and simple mode.

In favor of this plan it is urged, that a dollar, the proposed unit, has long been in general use; its value is familiar. This accords with the national mode of keeping accounts, and may in time produce the happy effect of uniformity in counting money throughout the Union.

3. The money Arithmetic, though an important question, is one that can admit of little dispute. All accomptants must prefer decimals.

4. What is the best mode of defraying the expense of coinage? Different nations have adopted different systems. The British value their Silver when coined, no higher than Bullion; Hence it follows that the expense of the mint, increasing the civil list, must be paid by a general tax; and tradesmen are disposed to work up the current coin, by which the tax is increased and continued.

In some other countries Silver or Gold when coined, are valued above the price of Bullion; whence tradesmen are discouraged from melting or working up the current coin, and the mint is rather profitable than burdensome.

Certainly there are good and conclusive reasons, why we should value the national coin above the price of Bullion; but there is a certain point beyond which we may not proceed, lest we encourage counterfeits or private imitations of our coin.

It has been proposed to make a difference of 2.5 percent nearly as an allowance for the Coinage of Gold and of 3.013 percent for the coinage of silver. It is probable that 3 percent would more than defray the expense of coining silver, in which case it would be a temptation to private imitation and would operate against the free circulation of the money as being valued too high.

It is to be remembered that silver coin ought to be encouraged and probably 2 percent or 2.5 percent would be a proper difference between silver coined and Bullion; The same difference to be made in the price of Gold. If this does not fully pay the expenses of the mint there will be a much larger gain on the coinage of copper, and if there should remain a small balance against the mint its operation will not be unfavorable.

The Coinage of Copper is a subject that claims our immediate attention. From the small value of the several pieces of copper coin this medium of exchange has been too much neglected.

The more valuable metals are daily giving place to base British half-pence and no means are used to prevent the fraud. This disease which is neglected in the beginning because it appears trifling may finally prove very destructive to commerce.

It is admitted that Copper may at this instant be purchased in America at 1/8 of a Dir. a pound. British half-pence made at the Tower are 48 to the pound. Those manufactured at Birmingham and shipped in thousands for our use are much lighter and they are of base metal. it can hardly be said that 72 of them are worth a pound of copper.

Hence it will follow that we give for British half-pence about six times their value. There are no materials from which we can estimate the weight of half-pence that have been imported from Britain since the late war, but we have heard of sundry shipments being ordered, to the nominal amount of 1,000 guineas, and we are told that no Packet arrives from England by which we are not accommodated with some hundred weight of base half-pence.

It is a very moderate computation which states our loss on the last twelve months at 30 thousand dollars by the commerce of vile coin. The whole expense of a mint would not have amounted to half of that sum, and the whole expense of domestic coinage would remain in the country.

The following forms of money are submitted : Dlrs.

The quantity of pure silver being fixed that is to be in the Unit or Dlr and the relation between Silver and Gold being fixed, all the other weights must follow. When it is considered that the Spaniards have been reducing the weight of their Dlrs, and that instead of 385, the grains of pure silver in the old Mexican dollar, the new dollars have not more than 365 grains, it will hardly be thought that 362 grains of pure silver is too little for the federal coin which is to be current in all payments for one dollar.

Some of the old Dlrs will admit of a second coinage, but the new ones will not. If the value of Gold compared to that of silver be fixed at 15 to one, and the alloy in each be 1/12th, the weight of the several denominations will be readily determined.

The price of bullion is immediately determined by the percentage that is charged towards the expenses of the mint. If the United States shall determine to adhere to the dollar as their money of account, and to simplify accounts by the use of decimals, there is nothing to prevent the immediate commencement of a coinage of copper.

Let the copper pieces, of which 100 are to pass for a Dlr, contain each 131 grains of pure copper, or 44 of them weigh 1 Pound. In this case our copper coin, when compared with the money of accot., will be 6 percent better than that of Great Britain. There will remain a sufficient profit on the coinage.

Copper of the best quality in plates may be purchased in Europe at 10d. 1/2 stg. In cutting blanks there will be a waste of 22 percent. Those clippings are worth 7d. 1/2 p. lb. Thence the blanks will cost 11d. 1/2 nearly; it may be stated at 1s. 9d., New York money p. pound, exclusive of the expense of cutting them, which is not great, as one man can readily cut 100 weight in a day.

The operation, improperly called milling, by which the sharp edges are worn off from the coppers, is not more expensive than cutting the blanks. In the process of coining Copper, eight artists or laborers may be required. One Engraver, 1 Laborer for the blank press, One Smith, 5 Laborers for the Coining Press.

By those people 100 weight of copper may readily be coined every day, or the value of 44 Dlrs. Deducting the necessary expenses, there may be saved 30 percent.

It will be noticed that the report of the Grand Committee on the Money Unit contends that exchange in the United States should not be more than 15 grains of silver for 1 of gold; that the charge for coinage should be 2.5 percent for gold and a little over 3 percent for silver; that the unit should be a dollar of 362 grains of pure silver with a multiple gold piece of 5 dollars and decimal aliquot parts.

On July 6, 1785, the Congress adopted the silver dollar as the currency basis on a decimal system, but no mint was established, although the country was suffering great loss in consequence of the circulation of base copper coins made in Birmingham.

The Half Cent Coin shows beside the first page of the broadside that began explaining the new money unit to the people in 1785. 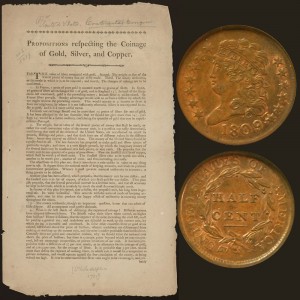