Today, the Montana State Quarter Coin remembers a group of men exploring the plains of Montana near the Missouri River 210 years ago.

This group of men known as the Corps of Discovery was lead by Meriwether Lewis and William Clark.

But, instead of seeing the prairie through the eyes of Lewis and Clark, let’s look at the journal entries of three other men of the Corps of Discovery including their spelling and grammar.

First, Sergeant John Ordway, initially from New Hampshire, was the only member of the Corps to keep a journal throughout the whole expedition. He was well-educated and was the senior sergeant of the expedition. His journals became invaluable to scholars of western Indian life.

May 21st Tuesday 1805.   a butiful morning.   wind from the west.   river falling a little.   we Set out at an eairly hour and proceeded on in the usal way by the assistance of the chord principally, but little use for the oars & less withe the poles, as the bottom are muddy.   we See no great bodies of pure Sand   the bars & points are rich mud mixed with fine Sand. Capt Clark walked on Shore Stard. Side   the river makes a great bend to the South   in a Northerly direction is a rich vallie contain Some Short grass, and prickly pears [6] without timber   the Country on the South Side of the Missourie is high Soil and mineral appearence as usal   Some Scatering pine &.C. ceeder on the hills. The wind which moderately all the fore part of the day increased and about dusk Shifted to the N. W. and blew high & Stormed all night   Several loose articles were blown overboard, our Camp [7] which was on a Sand bar on the Stard. Side at the lower point of an Island   we were obledged to move under the hills   the dust & Sand blew in clouds.   the bends of the river are Short and points covered with cotton wood under grooths wild rose bush. Capt. Clark killed 2 Elk to day. Several deer killed and a buffaloe cow.   we Came 20 miles to day.

Next, another sergeant, Patrick Gass, was a carpenter born in Pennsylvania. Initially he joined the company as a private but was promoted after the death of Sergeant Floyd. Though his notes were brief and not for every day of the trek, Gass was the first to publish his journal after the expedition’s return.

Tuesday 21st.   We proceeded on early and had a fine morning; towards the middle of the day the wind blew hard; but we went on very well for 20 miles, and encamped on a sand-beach on the North side.

The third entry came from Private Joseph Whitehouse initially from the Kentucky/Virginia area. He deserted early in the expedition but was allowed to re-join the Corps after returning and apologizing. But, perhaps that is why years later Clark did not provide much information in his notes about the man. As one of his duties, Whitehouse became the group’s tailor for mending and making clothing during the journey.

Tuesday 21st 1805.   a clear pleasant morning.   the 2 men returned who Stayed out all night had caught one beaver & killed a deer.   they Swam across the Mussel Shell River before Sun rise.   Soon after we Set off.   another beaver was caught   we proceeded on.   passed timbred bottoms & hilly land on each Side, but the River hills are not So high, as they were for Some distance below.   Some of the party yesterday discovered a high range of mountains [8] to the west, a long distance off.   we Saw Some old Indian Camps in a timbred bottom on N. S. where Capt. Clark killed an Elk.   about 1 oC. P. M. we halted to dine at a handsom timbred bottom on the South Shore.   one of the hunters killed an Elk.   the wind rose So high from the N. W. that we delayed about 2 hours and proceeded on   passed bottoms & pine hills as usal.   Came about 15 Miles and Camped on a large Sand beach on N. S.   one of the hunters killed a buffaloe another killed a beaver.   the wind rose verry high Soon after we Camped, and made the Sand fly So that it was verry disagreeable.   the most of the party moved back towards the hills.

Tuesday May 21st   This morning we had clear and pleasant Weather; the Men that were out catching beaver returned this Morning at day light.   they had bad success, having caught only one Beaver, however they kill’d a deer, both of which they brought to our Camp.   We set out early, and passed bottoms covered with Timber, and hilly land lying on both sides of the River.   The Hills here are not so high, as they were below,—   Some of our party that was out hunting Yesterday, reported that they had seen, a high ridge of Mountains, which lay to the West, but appeared to be a very great distance from them, We proceeded on, and passed by some Bottom land, lying on the North side of the River where we saw some Indian Camps, that were old; these Camps were surrounded with Cotton Wood Trees, 〈where〉 Captain Clark went on shore at that place, and killed an Elk, we shot a Beaver in the River, on our way here this day.—   About 1 o’Clock P. M. we halted to dine in a bottom of Timber, lying on the South side of the River, where one of our hunters killed an Elk.—   The wind rose here, to a very great height, from the North west so that we were forced to halt for two hours at that place.—

We proceeded on our Voyage about 3 o’Clock P. M and passed bottom land & Pine hills, lying on both sides of the River, and came about 5 Miles and encamped on a Sand beach, lying on the North side of the River, our hunters that were out, killed a Buffalo, and a Beaver which was brought to our Camp, Soon after we encamped, the Wind blew so very hard, and the sand flew so much; that it made the place disagreeable, that most of our party moved back to some hills not far distant from the River.

The Montana State Quarter Coin shows against a stormy view of a Montana prairie with mountains in the background. 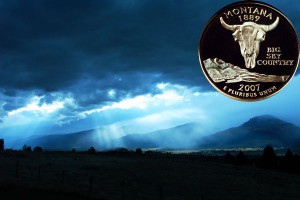