Today, the World’s Columbian Commemorative Silver Half Dollar Coin remembers one of the US Mint’s chief engravers, Charles E. Barber, on the 98th anniversary of his passing.

In April 1917, The Numismatist included the following obituary:

Mr. Barber was born in London in 1840. He was appointed an assistant at the Philadelphia Mint in 1869, and became chief engraver in 1880 upon the death of his father, William Barber, who held the position from 1869 until his death in 1879. The latest coins designed by the younger Mr. Barber were the Panama-Pacific $2 1/2 gold and the fifty-cent silver pieces.

Mr. Barber cut the dies for a number of the pattern series, and is said to have possessed a splendid collection of these pieces.

In 1918, the National Cyclopaedia of American Biography, Volume 16 included the following biography:

BARBER. Charles Edward, engraver, was born in London, England, Nov. 16, 1840, son of William and Anna May (Coultart) Barber, and came of a long line of distinguished engravers.

When his father was called to the Philadelphia mint in 1865, Charles E. Barber became his assistant in 1869, and upon the parent’s death in 1880 he was appointed chief engraver of the U. S. Mint by President Hayes.

The position is a unique one. Philadelphia being the parent mint, its engraving department is the only one for all the mints of the United States and the position of engraver is a direct presidential appointment.

During his incumbency, he designed the fifty-cent, twenty-five-cent, ten-cent and five-cent pieces which were used from 1892 to 1916.

His design for the reverse side of the Columbian half dollar was accepted in preference to that of Augustus St. Gaudens, and won the highest award medal of the exposition.

He also executed the dies for the coinage of fourteen Pan-American nations and China, Japan, Hawaii and the Philippines.

In 1905 the U. S. government sent him to study the mints of Europe, and as the result of his work, the medal department of the U. S. Mint ranks with the best of the French and modern schools.

He particularly excelled in portraiture, and his work in this field won high encomiums in foreign countries.

His medals of our presidents from Garfield to Wilson received special commendation in Washington.

Mr. Barber’s artistic genius was of the highest order. He not only attained first place in the art world as an engraver of coins, medals and dies, but he was a sculptor in miniature of rare merit and possessed great musical ability.

His death terminated an incumbency in office by father and son of more than half a century.

His favorite diversions were music, reading and walking and he was an ardent lover and student of nature.

The World’s Columbian Commemorative Silver Half Dollar Coin with the image of Columbus engraved by Charles E. Barber shows under Mr. Barber in a picture of the US Mint’s engravers, circa 1910. 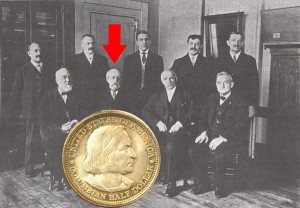