Today, the Hudson NY Commemorative Silver Half Dollar Coin tells the story of the settlement’s fathers (Proprietors) and their movements to gain incorporation for their town, especially their vote 230 years ago.

From the minutes of the Proprietors in the early days, we gain insights into their preparations and desire for the incorporation of their Hudson, New York settlement.

Prior to defining the town’s boundaries, the leaders began putting services in place such as the wells.

“1784, Sept. 2nd, It was voted that the “three wells” be stoned and masoned up. The “three wells” were probably three reservoirs, one of which was in Third street, another in the vicinity of Second street, and a third near the Market house.”

Next, the leaders began the process of defining their new town’s boundaries.

“1785, Feb. 7th, Seth Jenkins and John Thurston were appointed a committee ‘to repair to the manors of Van Rensselaer and Livingston, and find where said line intersects Claverack Creek, so that the bounds of the intended township, for which a petition is to be presented to the Legislature, may be more accurately described.’”

They appointed another committee to examine and define the limits on the north and south of the future city.

As they moved closer to their objective, they began the official request.

“1785, Feb. 17th. It was voted that ‘a petition be drafted to be laid before the Legislative authority of the state, for the purpose of getting ourselves incorporated, with city privileges, and that Ezekiel Gilbert, John Thurston, Ezra Reed, and Seth Jenkins be a committee to draft the same and with Gen. Van Rensselaer, to repair to New York as soon as convenient, and present the same before the General Assembly now in session, and use their utmost influence to get it passed immediately.’”

A committee was appointed “to lay out and plot,” the future city. The plot embraced Union, Main, Diamond and State streets, with Second, Third, Fourth and Fifth streets crossing them. First street was not opened until many years later.

1785, April 8th, “It was voted that Thomas Jenkins and David Lawrence be a committee to name the streets; also that Diamond street be put in a passable condition, and that the proprietors should send as many men as convenient until there was a sufficient number to work them, and on producing a certificate to Titus Morgan they should be entitled to receive four shillings per day,” English currency.

In the city’s charter approved April 22, 1785 that incorporated Hudson, the city’s boundaries were described as “Beginning at the channel of the Hudson’s River, in the County of Albany, directly opposite the Mouth of the Creek commonly called Major Abram’s Creek; thence to and up the middle of said Creek to the place where the Claverack Creek empties into the said Major Abram’s Creek; thence up along the middle of said Claverack Creek until the said Claverack Creek strikes the line of the Manor of Livingston to the East side of Hudson’s River; thence into the said River One Hundred and Eighty feet below High-Water Mark, and thence to the place of Beginning; keeping the same distance of One Hundred and Eighty feet all along from High-Water mark aforesaid. And all the freemen of this State within the limits mentioned were by the act ordained, constituted, and declared to be, from Time to Time and forever hereafter, one Body corporate and politic, in Fact and in Name, by the Name of the Mayor, Recorder, Aldermen, and Commonalty of the City of Hudson.”

Word traveled back to the people of Hudson that their request for incorporation had passed.

The Hudson Gazette of May 5 reported: “On Tuesday last (May 3) arrived from New York Ezekiel Gilbert, Esq., who brought with him an Act for incorporating this part of the District of Claverack, agreeable to a Petition preferred by the Inhabitants, under the Name of the City of Hudson. This pleasing and interesting Intelligence was announced by a Discharge of Thirteen Cannon, and a Display of Colors from the Shipping at the Wharves and on the adjacent Eminences.”

The Hudson NY Commemorative Silver Half Dollar Coin shows against a background of Hudson, New York circa 1821. 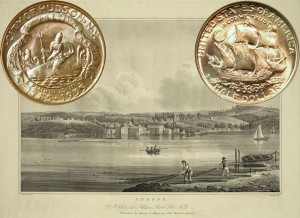