Today, the Cincinnati Music Center Commemorative Silver Half Dollar Coin tells the tale of the Jeffries vs. Ruhlin prize fight scheduled in the Saengerfest Music Hall in February 1901.

On February 13, 1901, many Ohio newspapers printed articles about the upcoming February 15th prize fight between Jim Jeffries and Guy Rhulin.

In 1897, the two men fought to a referee’s decision of a draw at Mechanic’s Pavilion in San Francisco.

By 1899, Jim Jeffries fought his way to the World Heavyweight title.

In 1901, the men wanted a rematch to decide the better fighter of the two, and promoters obtained permission from Cincinnati’s mayor and scheduled the Saengerfest music hall for the contest.

However, Governor Nash did not want “prize fights” in his state. He wanted Ohio’s fight laws interpreted as being only for athletic sparring matches.

Cincinnati — It is unofficially stated that the Jeffries-Rhulin boxing contests, scheduled for Friday night, will be postponed as parties from a distance will not have time to get here after the decision of Judge Hollister is rendered tomorrow. But the date to which the contest is postponed will depend upon the decision tomorrow. If the injunction is refused the postponement will be for only a few days. If the injunction is allowed, the postponement will be for some weeks, in order to give time for carrying the case through the circuit and supreme courts.

Cincinnati — Those connected with the proposed boxing tournament as Saengerfest hall, Friday evening, were on the anxious seat today. Judge Hollister’s decision in the suit for an injunction against the contests, is expected tomorrow at 11 am, and should this favor the management, they are subject to still greater anxiety as to the possible course of Governor Nash, who has repeatedly intimated his intention to prevent the contests.

While the promoters of the contest are hopeful that Judge Hollister will hold his court without jurisdiction in the matter, or may issue a restraining order against a “prize fight,” and not against a “boxing contest,” it is generally thought by outsiders that a permanent injunction will be granted and that the contests will then be postponed for two or three weeks in order to carry the case to the higher courts.

In the event of Judge Hollister deciding his court without jurisdiction or restraining the management from holding a “prize fight,” the promoters will, it is stated, make haste to prepare for the contests under the permit issued by the mayor for “boxing contests.” Here is where the position of Governor Nash will assert itself, and it is understood he does not accept the claim that such a thing as a “boxing contest” for the championship of the world is possible, without a violation of the Ohio statutes against prize fighting.

The situation grows more and more chaotic. Local papers publish stories of actual orders to troops to be sent to Cincinnati to encamp around the Saengerfest building and prevent the fight. One rumor is that ten companies are to come from Toledo on a special train, leaving Toledo Friday morning and reaching Cincinnati Friday afternoon.

The alleged plan is to leave the train at Winton Place, north of the city and march through Avondale to the Saengerfest hall, which is located north of the main portion of Cincinnati. This order for the movement of troops is alleged to be absolute, except in case the promoters of the fight decide, before Friday morning, to postpone the fight, or abandon it altogether.

But, a complication arises from the operation of a law enacted after the famous court house riot in Cincinnati in 1884, which provides that when troops are sent to a city of Cincinnati’s class, they shall be subject to the order of the mayor of the city. Mayor Fleishmann has legalized the affair, however, by granting a permit for a glove contest and the promoters of the fight declare that they intend to have a glove contest.

It would, therefore, seem to be a logical thing for the mayor to refuse to use troops to suppress something that he had declared to be lawful, and thus the governor’s intentions might be thwarted, unless he should come to Cincinnati himself and assume command, superseding the mayor.

Today, wires were strung to the hall and heating arrangements perfected.

Directors of the Saengerfest club say they will take no action in the way of postponement or abandonment until after the announcement of Judge Hollister’s decision.

In reply to a telegraphic inquiry by the Times-Star, Governor Nash wired that paper as follows:

“No newspaper has been authorized to say anything in regard to my present or future intention in connection with the prize fight. All that has been printed is guess work. I cannot talk about these matters. It would be injurious to the public service.”

Columbus — In compliance with orders issued by Governor Nash, Moulton Houk, of the Cincinnati, Hamilton and Dayton railroad, quartermaster general on Governor Nash’s staff, General W.V. McMakin, commanding the First Brigade, Ohio National Guard, and Col. George B. Donavon, aide on the governor’s personal staff, arrived here today and went at once to the governor’s office, where they were closeted with the governor for some time. McMakin and Donavon came from Cleveland, where they have been on duty in connection with the court martial in session there and Houk came from Toledo. The conference was reported to be in connection with the movement of troops to prevent the boxing contest at Cincinnati in case such action should become necessary.

When the conference was concluded Governor Nash admitted that he had made plans to cover emergencies but intimated that he will not anticipate the action of the courts.

It is understood that all plans have been made and precautionary word has been sent to all officers who are likely to be called upon, but there the matter rests.

Toledo — So far no orders of any kind have come to the Toledo officers of the Sixth regiment Ohio National Guard in relation to the Cincinnati “glove contest.”

Col. Stanberry of the regiment, is in Cincinnati in connection with his duties as traveling salesman.

The next day, Thursday, Judge Hollister granted an injunction against the fight. The judgment cancelled the Friday night fight, but the promoters planned to appeal the decision.

However, the Jeffries vs. Ruhlin fight never occurred at Saengerfest hall.

On November 15, 1901, the two men fought again at Mechanic’s Pavilion in San Francisco. This time, Jim Jeffries won the bout and retained his World Heavyweight title.

The Cincinnati Music Center Commemorative Silver Half Dollar Coin shows against a musical view of Saengerfest hall, circa 1878. 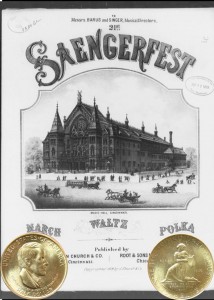