Back in 1751, Benjamin Franklin first used the rattlesnake in his published commentary on the British policy of sending convicted criminals to the colonies. Franklin suggested that the colonists should send rattlesnakes to the British as a fair trade.

In 1754, during the French and Indian War, Franklin again used the snake in his publication. This time, the snake was in eight parts representing the colonies with the words “Join or Die” underneath.

As tension increased with the British Rule, the rattlesnake became more frequent as a symbol of the American colonies.

In the fall of 1775, the Continental Congress created the Navy to deter the British ships attempting to deliver supplies to the British soldiers located in the colonies.

In addition to the Navy, the Continental Congress tasked groups of Marines to accompany the ships on their first mission.

The early Marines carried drums painted a bright yellow. A coiled rattlesnake with 13 rattles decorated the drums with the phrase “Don’t Tread On Me” printed underneath.

At the time, Christopher Gadsden from South Carolina served in the Continental Congress and was a vocal opponent of the British rule.

During the French and Indian War, Gadsden rose to the rank of Lieutenant Colonel.

As the new Navy with the Marines prepared for their first mission, Gadsden presented Commodore Esek Hopkins with flag similar to the Marines’ drum design.

The flag had a yellow field with a rattlesnake coiled above the words “Don’t Tread On Me.”

It is fitting that John Paul Jones hoisted the first flag as he never pulled an American flag down from a ship’s mast due to defeat.

The Don’t Tread On Me flag, also known as the Gadsden flag, did not represent America for long during the Revolutionary War.

However, through the years since its first hoist, people have used the flag and the motto to symbolize American patriotism on many different occasions.

The Benjamin Franklin Scientist Silver Half Dollar Coin shows against a portrait of John Paul Jones in fighting form. 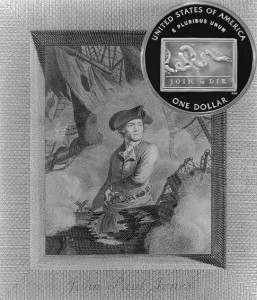