Today, the Hudson Commemorative Silver Half Dollar Coin tells the story of the Apollo 12 lift-off and mission from 45 years ago today.

The Hudson exploration was not the first on the eastern seaboard of the North American continent. Neither was the Apollo 12 mission the first to land on the moon.

In both cases, though, the ship and the spacecraft provided additional discoveries.

On November 14, 1969, the Apollo 12, the second manned mission to land on the moon, launched from Cape Canaveral, Florida attached to a Saturn 5 rocket.

Thirty-six seconds after lift-off, lightning struck the moving rocket and knocked out the power to the command module.

Undamaged, the rocket continued on its way.

Fortunately, the power returned to the command module within minutes.

After a couple of days traveling then obtaining an orbit around the moon, the landing module touched down on the rim of the moon’s Ocean of Storms on November 19.

The primary mission objectives of the second crewed lunar landing included an extensive series of lunar exploration tasks by the lunar module, or LM, crew, as well as the deployment of the Apollo Lunar Surface Experiments Package, or ALSEP, which was to be left on the moon’s surface to gather seismic, scientific and engineering data throughout a long period of time.

Other Apollo 12 objectives included a selenological inspection; surveys and samplings in landing areas; development of techniques for precision-landing capabilities; further evaluations of the human capability to work in the lunar environment for a prolonged period of time; deployment and retrieval of other scientific experiments; and photography of candidate exploration sites for future missions.

The astronauts also were to retrieve portions of the Surveyor III spacecraft, which had soft-landed on the moon April 20, 1967, a short distance from the selected landing site of Apollo 12.

The flight plan for Apollo 12 was similar to that of Apollo 11, except Apollo 12 was to fly a higher inclination to the lunar equator and leave the free-return trajectory after the second translunar midcourse correction. This first non-free-return trajectory on an Apollo mission was designed to allow a daylight launch and a translunar injection above the Pacific Ocean. It also allowed a stretch of the translunar coast to gain the desired landing site lighting at the time of LM descent, conserved fuel and permitted the Goldstone, Calif., tracking antenna to monitor the LM descent and landing.

In addition, the Apollo 12 flight plan called for the LM ascent stage to provide a measured seismic stimulus for the ALSEP seismic experiment. Following crew return to the command and service module, or CSM, a controlled burn of the remaining propellants in the empty ascent stage caused the stage to crash into the moon, providing a measurable seismic shock impulse.

The Hudson Commemorative Silver Half Dollar Coin and the Apollo 12 insignia show against a background of Commander Conrad viewing the Surveyor 3 on the moon’s surface with the Lunar Module in the upper right. 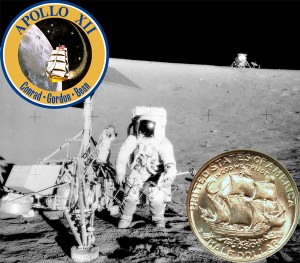