An entertaining read, newspapers continued to support the tale at least into the 1960s.

With interesting prose, this article from August 1906 sets the stage.

“The Face on the Cent

“It is not that of an Indian, but of a Pretty Little Girl.

“Mrs. Sarah Longacre Keen, who lived and died in Philadelphia, came nearer being the queen of the American Mint than any woman who ever lived. With the exception of Queen Victoria, whose image was engraved on every coin of the British and Indian empires, Mrs. Keen was first in the the number of her metal photographs. Her face as a girl of twelve summers is to be seen on every American cent issued since 1836 from Uncle Sam’s coin factory.

“Between 1828 and 1840 James Barton Longacre was chief engraver in the United States Mint in Philadelphia. In 1835 a competition was opened for sketches and engravings for the new copper cent that was to be issued and which has since been in service. There were over a thousand designs offered. The prize was a good one. Longacre racked his brain for some original and singular design that would strike the judges, but for months he failed to satisfy himself.

“One morning a number of Indians, with their chief, who had been to pay their respects to the great white chief in Washington, came to the city and were shown through the Mint. They were introduced to the white chief’s picture maker, who was just then showing his young daughter, Sarah, the great concern. The old chief was attracted by the sweet faced maiden and her interest in his feathers and paint. She childishly wondered how she would look in the feathered headgear. This was told the chief, who solemnly divested himself of his feathers and had them placed on the girl’s head. The effect was so striking that the father took time to make a sketch of the picture, finishing it afterward for his own amusement.

“At the last moment of the period given for sending in engravings he bethought himself of the possibility of the combination of Indian feathers and Saxon sweetness. He got it in, and much sport was made of the child at the time in the city because of the incident. The sketch passed through the seventh sifting and finally reached the last round. By one vote it won, and ever since Sarah Longacre’s young face has served for the humblest of coins, than which no single coin in the world has such tremendous circulation. Detroit News-Tribune.”

Interestingly, articles years later repeat several of the “facts” in this article.

–James Barton Longacre was Chief Engraver from 1844 to 1869, years after the dates given.
–Sarah Longacre was born in 1828, would’ve been late 20s when the coin was designed.
–The Mint produced the Indian Head cent from 1859-1909, not from 1836 as stated.
–Furthermore, some historians state that Longacre attributed his model to a statue of Venus on loan to Philadelphia from the Vatican.

The story entertained in 1906 but lacked knowledge about the designer, his family and the Indian Head Cent. 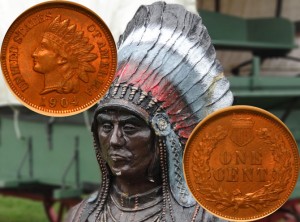