How much is fact and how much is embellishment is yet to be determined.

But, let’s go back in time – fifty years in time and look at the interest then.

It seems the US Mint had difficulties with demand at that time as well.

First, the US Mint artists had to scramble to develop and modify their chosen designs. At least, they had starting points for the obverse and reverse designs from recent models for presidential medals.

When the legislation was approved in late December 1963, the Mint was almost ready for the production of the proof and the circulating coins.

As soon as the public learned the coins would be struck, people began mailing their orders for the 1964 proof set.

In early February, US Mint and Department of Treasury officials began the production, simultaneously, at the Philadelphia and the Denver mints for the new half-dollar coins for circulation.

They planned round-the-clock production to satisfy the need.

Of course, when the Mint distributed those new coins to the Federal Reserve system, both experienced and new collectors flocked to their local banks to obtain their coins.

Most of these coins were put away, not circulated.

One banker commented, “Collectors used to come in for one coin or a handful. Now they want new coins by the roll or bagful, and most of the time, we know, it is with the idea of hoarding them in hopes of selling to collectors sometime in the future at a tidy profit.”

The Director of the Mint in 1964 responded to the public’s obsession, “Coin-collecting as a hobby is perfectly legitimate, and so are most coin dealers who buy and sell coins in quantity. But the persons who buy coins by the bag or hundreds of bags, and hoard them on the theory that they will make a profit some day, are not only ruining the hobby but also creating enormous problems for the Mint.”

Of course, the passion to acquire the 1964 half-dollar is different from the interest in the 2014 gold coin, however similarities do exist.

In 1967, a coin dealer quizzed about what happened to all of the early 90% silver Kennedy half-dollar coins replied, “I wish I knew, I’d like to have one.”

He went on to comment that he did not understand the fanatical interest in the coins. He noted that they were not rare (millions were struck), silver was not at a premium (the 40% silver ones disappeared quickly too), and he did not believe the American sentiment for the late president explained the interest either.

Now, jump ahead 50 years, what makes the new gold half-dollar coin so desired?

Is it interest in the coin, in the historical significance or in potential profit? 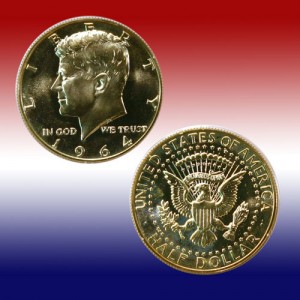