As part of our Found Items series, we’ve been posting information from a US Postal Service booklet of Submarine history and stamps.

In this case, it was a stamp booklet on submarines.

Today’s post shows the remaining pages of the short but informative booklet.

Continuing in the booklet, the next page shared information about the “boomers.” 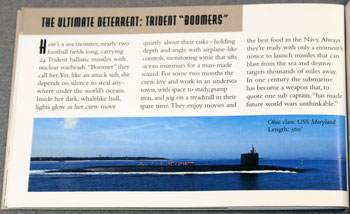 Here’s a sea monster, nearly two football fields long, carrying 24 Trident ballistic missiles with nuclear warheads. “Boomer” they call her. Yet, like an attack sub, she depends on silence to steal anywhere under the world’s oceans. Inside her dark, whalelike hull, lights glow as her crew move quietly about their tasks – holding depth and angle with airplane-like controls, monitoring sonar that sifts ocean murmurs for a man-made sound. For some two months the crew live and work in an undersea town, with space to study, pump iron, and jog on a treadmill in their spare time. They enjoy movies and the best food in the Navy. Always they’re ready with only a moment’s notice to launch missiles that can blast from the sea and destroy targets thousands of miles away. In one century the submarine has become a weapon that, to quote one sub captain, “has made future world wars unthinkable.” 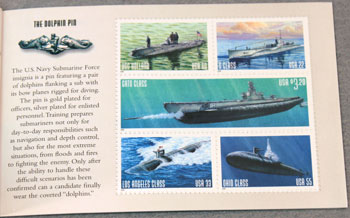 The U.S. Navy Submarine Force insignia is a pin featuring a pair of dolphins flanking a sub with its bow planes rigged for diving.

The pin is gold plated for officers, silver plated for enlisted personnel. Training prepares submariners not only for day-to-day responsibilities such as navigation and depth control, but also for the most extreme situations, from floods and fires to fighting the enemy. Only after the ability to handle these difficult scenarios has been confirmed can a candidate finally wear the coveted “dolphins.”

To the right are the five submarine stamps. These stamps are repeated on the following page. 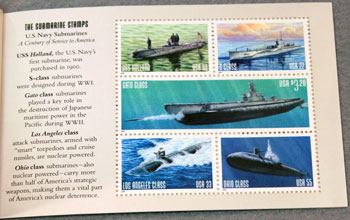 U.S. Navy Submarines
A Century of Service to America

USS Holland, the U.S. Navy’s first submarine, was purchased in 1900.

S-class submarines were designed during WWI. 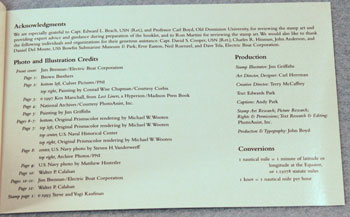 Like the rest of the booklet, the last page includes a significant amount of information.

In addition to the $9.80 in stamps, this simple booklet provided a lot of valuable information in a small amount of space. Many of the historical details remain true today.

Of course, the current number and type of submarines in the U.S. Navy along with the armaments they carry have probably changed since the booklet’s release in 1999.

But the “silent” fleet and her officers and crews prefer to keep that information to themselves.

May they stay safe and well.