Two weeks ago we talked about an incomplete 2000 proof set with one less coin than it should have in the set.

This time it’s a 1998 proof set that rattles. With the way the US Mint packaged the 1998 Proof Set, there should not be any noise coming from the set.

One would think that if the set rattles, you would hear it and know that at least one set in the group you’re buying is a problem. But, coin shows can be noisy. Plus, the rattling proof set arrived within a large group of other proof and mint sets contained in a number of boxes. Reviewing each and every set is time-consuming and not always possible during the coin show.

The rattling became noticeable when the boxes were unpacked and the sets organized.

From the outside, the package looks as it should: 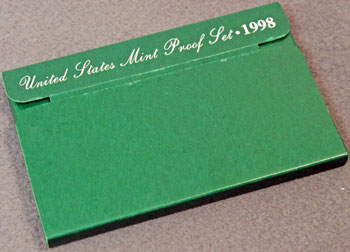 Opening the set, the reasons for the rattling are clearly seen: 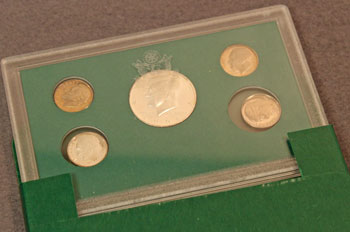 At first glance, it’s four dimes and a half dollar which means this set, though not expensive, just lost its value. These coins just became “shelf” coins since there’s no market for the individual clad coins especially when they do not look their best.

Now, if this had been a 1998 silver set, a different story could be told. Less-than-attractive silver dimes and silver half dollars at least have value for their 90% silver content.

Taking a closer look at the coins in this rattling 1998 Proof Set, at least two of them are silver. It seems that whoever broke the set apart used the holder to protect coins from other sets and not necessarily cupro-nickel clad coins. 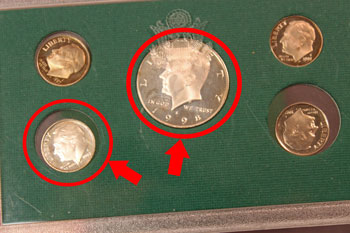 The large half dollar coin is somewhat hidden behind the heraldic eagle in the plastic since the holder was put back together backwards and upside down. But, looking through the eagle, this coin is noticeably silver. Plus, there is an obviously silver dime rattling around in the nickel slot. Not taking the coins out of the holder to look at their edge, the other dimes appear to be clad.

At least $0.60 in face value is silver. Or, put another way, there is 0.43403 troy ounce of silver in this otherwise almost valueless proof set.

At today’s silver prices, this rattling 1998 proof set holder with its two silver coins  just became worth more than a complete, nice and shiny, yet inexpensive, 1998 Proof Coins Set.

There’s a lesson here. Bad things are not always as bad as they seem, and sometimes, bad things even turn out better than the good things.

Isn’t it interesting — numismatics has life lessons, too.